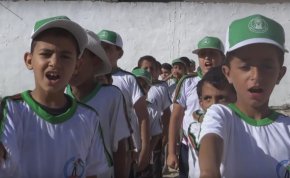 Its hard not to be moved by the words of this boy in Gaza, living in a war zone not of his making and facing a miserable and uncertain future. Its a small community of some one and a half a million so when conflict occurs such as in January 2009 its indiscriminate; in that attack over 1300 Palestinians were killed in Gaza, 300 of them were just children. Not only do children grow up with the constant threat of death, basic amenities such as a secure water supply are also non-existent with Gaza's sole water source now unable to supply water fit for human consumption. Not only that but the Gaza Strip is effectively under an Israeli blockade affecting daily life on every level from ensuring adequate food supplies, education, electricity, health and the maintenance of essential services such as sanitation infrastructure. In April 2012, because of no electricity, a family using candles for lighting started an accidental fire in the children's bedroom burning three of them to death. 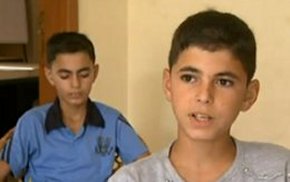 Although bound by Israel to its west. Gaza has a coastline however the blockade is also by sea despite the UN considering that to be a denial of basic human rights and a contravention of international law. As such, poverty is rife with 70% of all children in Gaza living below the poverty line forcing many of them to leave school in order to work to help their families leaving only around one in five children passing the required school exams.

Of course children in Gaza play like all others. Often its flying kites, mucking around on the beach, and, of course, football but many of their games in the bombed out streets are war games with pretend guns and rocket launchers even pretend torture and interrogation. And that's what they have to play with because there's nothing else. As one ten year old stated "All that's left is sand. If they could have destroyed the sand, they would have destroyed that too."

Here at Child Sponsorship we are not making a political judgement about the situation in the Middle East but its not hard to conclude that children in Gaza who have been brought up in misery, fear and poverty with poor educational attainments will find it hard to find peace either emotionally or with their territorial neighbours as they mature into adults.

Details of how to sponsor
a child in the Gaza Strip with Gaza
child sponsor programs.

Mainly African, we also extend our
listings to other children in need who
live in Haiti, Yemen and Gaza.

As well as sponsoring a child why not explore volunteering opportunities in Africa?

Sponsor a child listings by country together with details of children's lives there.

Information about the growing crisis of street children in Africa escaping poverty and violence.

HIV and AIDS has had a devastating impact on on children and their families across Africa.

All the latest news about children in Africa, their circumstances, children's right developments and legal issues.


Everything you need to know:

Sponsor an African child for less than the cost of a daily newspaper with our child sponsor programs.

Mainly African, we also extend our listings to other children in need who live in Haiti, Yemen and Gaza.

Get your child sponsor programs listed in this online sponsor an African child directory for free!

Explore the lives of children in Africa with our detailed country child sponsor programs directory.