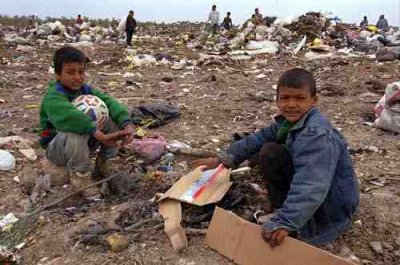 The Gaza strip has long been a flash point in the middle-east. Recognised as a territory in 1948 following the creation of the Israeli state, it is home to one and a half million Palestinians (with 400,000 living in Gaza City itself) in an area measuring just six miles wide and twenty five miles long; one of the most densely populated areas of the world. Poverty is rife with 70% of all children in Gaza living below the poverty line forcing many of them to leave school in order to work to help their families leaving only around one in five children passing the required school exams. 80 per cent of children in Gaza rely on food hand-outs and 14 per cent of children there suffer from stunted growth due to malnutrition not least because the air and sea blockage of the territory prevents vital supplies getting through, a situation the UN considers to be a denial of basic human rights and a contravention of international law..

These children live in daily fear of attack and play in bombed out streets, with no secure water and that which is available is no longer fit for human consumption, no proper sanitation and no real hope for the future. One eight year old boy from Gaza put the child situation there succinctly "Let the world come and see our situation. Our children who are thrown in the school classrooms sitting on the floor, they have no shelter, no food, no water, no electricity. Is this life? This is siege, this is the biggest siege, the greatest siege by Israel. I am telling the world to watch us and see how we are living.

"We never play, we never laugh or learn, and we never watch kids programs. I turn on the TV and all I see is martyrs' funerals, shooting and death, war and tanks and incursion, I don't find any children programs to enjoy and learn from. I don't find any cartoons I can watch and have fun, its all funerals, lifting martyrs and shooting. here we don't have any food, any water, anything. We are sitting here like beggars. Let the world see other nations, how they are enjoying their lives and laughing. We have suffered a blockade for years now."

With SOS Children, you can help orphaned and abandoned children by sponsoring a child.

A child sponsor program where you can exchange cards, letters and photos with your sponsored child.

Give a Palestinian child access to food, clothing, shelter, education and medical assistance.

By investing in the next generation as a sponsor, you can change the course of one life.

Sponsor a child and support an orphaned child in some of the most hard to reach areas in Gaza.

Info, facts and figures about
children in Gaza and the
challenges they face.

Mainly African, we also extend our
listings to other children in need who
live in Haiti, Yemen and Gaza.

All the latest news about children in Africa, their circumstances, children's right developments and legal issues.

As well as sponsoring a child why not explore volunteering opportunities in Africa?


Everything you need to know:

Sponsor an African child for less than the cost of a daily newspaper with our child sponsor programs.

Mainly African, we also extend our listings to other children in need who live in Haiti, Yemen and Gaza.

Get your child sponsor programs listed in this online sponsor an African child directory for free!

Explore the lives of children in Africa with our detailed country child sponsor programs directory.